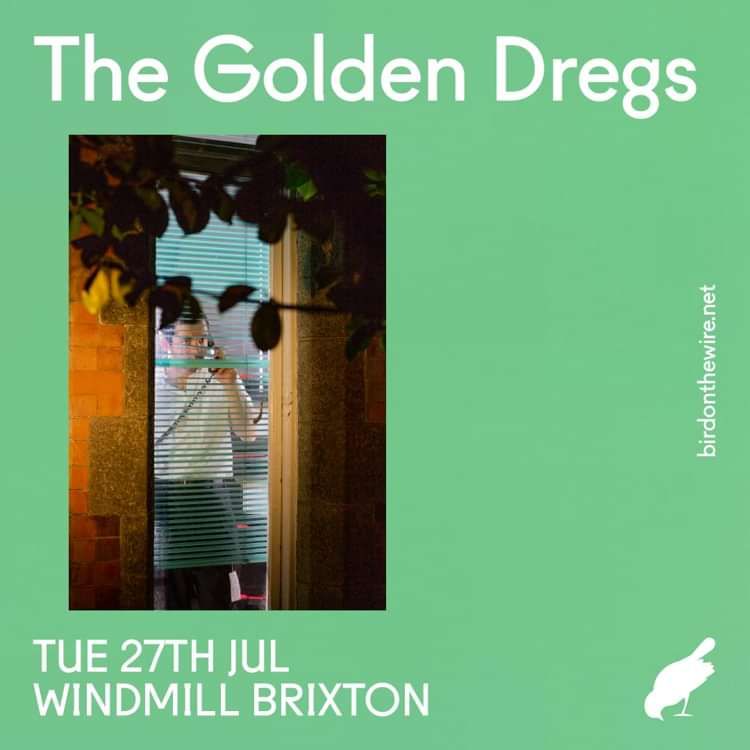 Bird On The Wire presents:

Please note; this show has been rescheduled from 14 July.

The Golden Dregs might be on the project of just one man, Benjamin Woods, but beyond that it’s a lot of different things. “It’s adopted the guise of a bar-band, a lonely man with a piano, a singer with a backing band, and an awkward and insecure karaoke performance,” says Woods. “I think of The Golden Dregs as a project as opposed to a group or a person. It’s a platform for me to explore different musical avenues.”

It makes sense that The Golden Dregs, which is led by the rich baritone croon and Americana-tinged tones (think Stephin Merritt of Magnetic Fields collaborating with David Berman of Silver Jews with Dan Michaelson making the brews) of Woods, would encompass so many things after a period of such instability and movement for him. Cornwall, Manchester, Cornwall, Germany, back to Cornwall and then onto London. Woods has spent the last several years ricocheting from place-to-place, shifting from a cockroach-infested place in Manchester to a failed relocation to Germany that resulted in him having to temporarily move back in with his parents - all the while searching for a place of stability to make his second album after 2018’s Lafayette. Yet for someone who has been such an itinerant in recent years, Woods has made a record with a distinct and coherent personality that radiates the feeling of someone who has finally found where they need to be and where they want to go.

Hope Is For the Hopeless is a record that emanates a profound subtlety; the arrangements can be as lush as they can tender with Woods understanding the need and importance of space, sometimes allowing the honey-drenched tones of his vocals to be enough or to take a step back and let piano tinkles, shuffling drums or the gentle fizz of a drum machine, and thoughtful melodies to lead the way. It makes sense that attentive composition is so at the heart of what Woods does because he’s keen on avoiding the trappings and clichés that many others fall into. “Unless the songwriting’s phenomenal or the sound is totally out-there, I find it increasingly hard to be engaged by a conventional guitar band arrangement,” he says. “It’s not that I don’t love guitar bands, I just think my quota is kinda full right now. My desire to get excited by music drives me to explore these different avenues to make the project as engaging to its audience as possible.”

Although for a period, having the audience in mind when making this record was a far away thought process as Woods holed up with intense focus to get the record finished and got lost in his own head for a while. “I was probably quite frantic at the time,” he recalls. “Trying to distract myself from the life I’d just left and not freak out too much about the black hole that was the future. I was totally immersed, I didn’t leave the house much.”

This approach can be felt rippling through the tracks too, the opening “Back Down The Mountain”, which glides to life with woozy, swirling guitar lines and dry yet warm vocals, is about “retreat and realising you need to get the hell out of somewhere, and maybe even coming to the realisation that you should’ve done that long ago. It’s how I felt when I got on the flight out of Germany, not knowing what I was headed towards. It’s tired and defeated, although maybe there’s a hint of optimism.”

Elsewhere there’s tracks informed by the likes of Raymond Carver, Leonard Cohen, Lee & Nancy, Death of a Salesman, the poetry of Richard Hugo and a general sense of personal introspection, reflection and the kind of life unpicking you can do once you’ve stopped moving.

The closing track, unusually, is the title track and despite the title’s less than optimistic wording in actual fact it captures this co-existence of Woods’ recent years, plucking beauty and optimism from a period of tumultuous uncertainty. “It feels refreshing to me, some welcome relief after the sadder themes of the previous few songs. Even if the lyrics aren’t exactly positive, there’s an optimistic feel to the experience. And in that sense, I see it as laying the ground for the next record. It acknowledges the themes of Hope is for the Hopeless and suggests that it’s time to move on.”