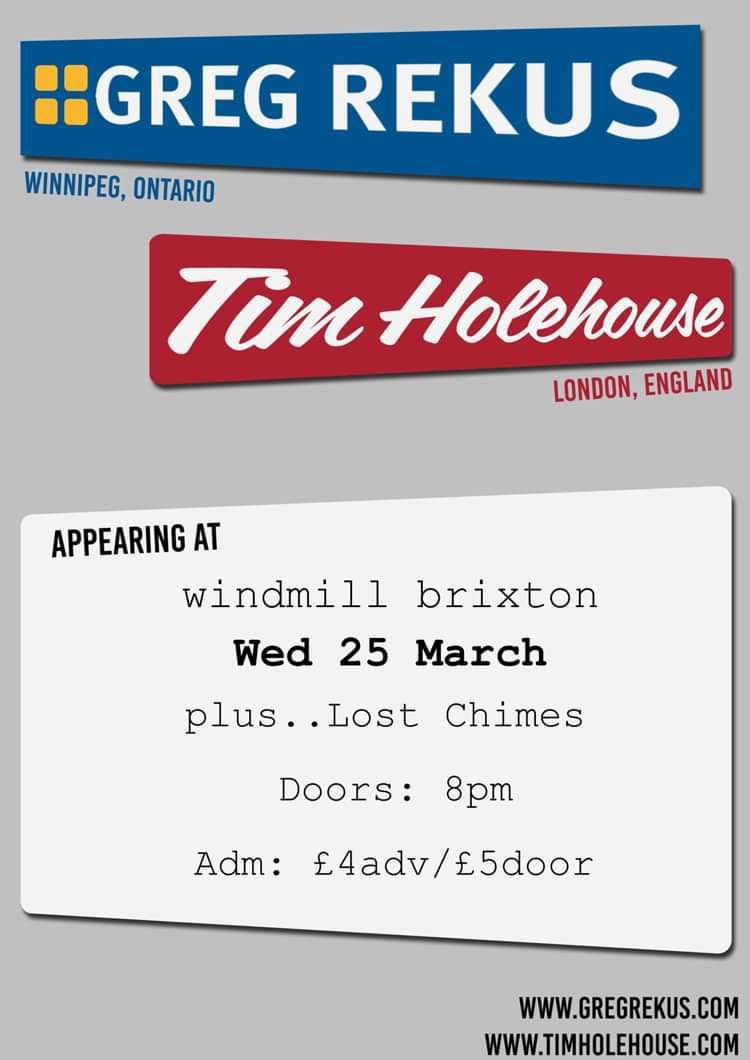 CANCELLED - being live-streamed instead!

Friends (of ours) Tour!!! Greg Rekus From Winnipeg met Tim while he was on his first Canadian tour in August 2016 having mutual friends introduce them when Tim found himself with out a place to crash in Winnipeg on his tour after being abandoned by a tour mate. Greg came to the rescue and the pair grew a friendship up. This then saw Tim return the favour by inviting Greg on a tour of England and Scotland in March 2017. They have now decided to undertake an even more epic adventure going across Canada to Mexico and onto Europe..

With an acoustic guitar, giant stomp box, and punk rock tucked away in his back pocket, Greg Rekus' unique brand of Folk Punk or “Riot Folk” is like no other. He tours Europe regularly from London to Ukraine. He consistently plays all around the United States and Canada. Finally, he has released two full length albums and a 7 inch in several different countries through a network of indie labels. With a new album on the horizon, Greg has again enlisted audio genius John Paul Peters (Royal Canoe, Comeback Kid, Propagandhi) as an engineer/producer. Aside from Rekus, the album will feature local musicians Tabitha Hemphill on bass and backup vocals and Erik Strom on drums. The album boasts 13 original tracks and picks up where his previous release “Punkoustic” left off, but with more of a pop punk, catchy feel. With more mature lyrics, tasteful arrangements, and diverse tempos, this album will be amongst Rekus' best work. He is very excited for a release in early 2017 and already has major touring plans in the works. Punkoustic” broke the top 30s on college charts across Canada and the USA and boasted a number 10 spot on Vancouver CITR. In addition, the album climbed all the way to number 1 on CKUW Winnipeg!

"I have been on the road pretty much full time touring my music for over 10 years now. I still continue to seek new adventure and build upon the hard work I've already put in (I'm not one to take the easy way round). Having toured almost every country in Europe, Iceland, Japan, Australia, USA and Canada (to name a few) I mainly play my own material, which comes from a variety of sources and inspirations from Punk, Hardcore, Blues, Jazz, Country blues, Experimental music, Heavy Metal and even Electronic music (good music is good music right?). I'm just a massive music fan of all sorts and want to reflect that in my own out put. I'm not very keen to be boxed in as a song writer or certain style. Each album has a different take on myself and the music is very much written from the heart about subjects I either am interested in or personal experiences."

Lost Chimes is husband and wife Nicky and Gemma Kirk. They will be playing their upcoming single release, "Love will tear us apart" as well as other tracks from their upcoming indie folk debut album.