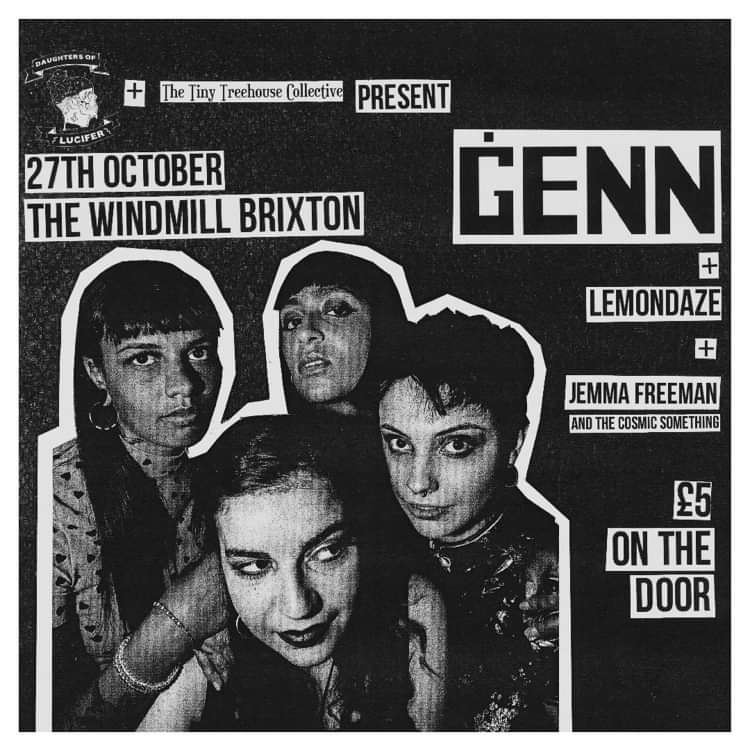 ĠENN (f.k.a. Cryptic Street//pronounced Jenn) is a musical riot, ready to rock your ears and mess with your brain. They’re serving alternative post-punk madness with a fun twist, fresh out of their DIY framework. Based in Brighton, the band is a result of a trans-national pairing which came about through the internet between three musicians from Malta, and one from the UK. ¡¡¡ Debut album!!! The tantalising ‘Titty Monster’; a burst of punk attitude with a dash of psychedelic, inner conflict and hell-raising fun. Beware the Titty Monster, because it’s it’s coming for you! Purchase now >> https://bit.ly/2ZbTFs5

Lemondaze is the female co-fronted, 8 legged love child of shoegaze and post-punk from Cambridge.

JEMMA FREEMAN AND THE COSMIC SOMETHING

Known previously for their song writing and guitar work with dreamy psych band Landshapes (Bella Union) and new wave art band The Fcks (who were fcking great), Jemma has taken these two approaches and tinged them with energetic glam rock.

Lush guitar tones and introspective psychedelic lyrics brought together with unbounded energy and urgency. The music presents their own unique strength and pulls together themes of secret worlds, hidden agendas, apathy and anxiety. Jemma’s sonorous voice tells the story of unravelling completely and tying yourself back up again.