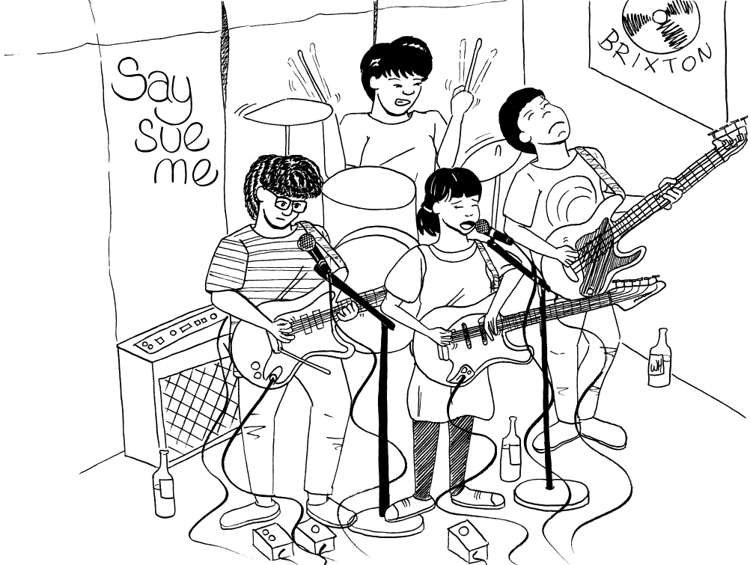 After Selling Out The Lexington, SAY SUE ME have added an extra London date to have a big end of tour party!

Say Sue Me is a surf inspired Indie-Rock/Pop act from Busan, South Korea and cited as one of 2018's ‘break-out bands'.

Childhood friends Jaeyoung Ha (Bass) and Byungkyu Kim (guitar) met drummer Semin Kang and played in bands together since winter of 2012, when they met Sumi Choi at a tea shop in Nampo-dong. They liked her speaking voice and immediately offered her a spot as the vocalist in a new band that would become Say Sue Me. Sumi turned out to be a natural at songwriting. Semin sadly suffered trauma from a fall. New drummer Changwon Kim stands in while they await Semin’s recovery.

Following showcases at SXSW in 2018, the band released their sophomore album “Where We Were Together” and a RSD covers EP which won praise from Pitchfork, NPR, Billboard, i-D, The Independent, Stereogum, Paste, MTV, Uproxx. Fader, DIS, The 405 & more.

Three tracks were playlisted on BBC 6Music where Lauren Laverne, Tom Ravenscroft, Gideon Coe and Don Letts have championed the band as well as Elton John on Beats1 and KEXP.

GQ Korea “The most famous Korean Indie band in the world”

KEXP “…jangle-pop hooks, stunning vocal melodies, and intricate guitarwork that stands up proudly against some of their influences like Yo La Tengo and Pavement…”

Billboard “…with a growing buzz surrounding their jangly single, “Old Town,” Korean indie quartet Say Sue Me is on the up-and-up…”

Bandcamp Daily “…an addictive amalgam of sugary indie pop and gritty surf that showcases a finely-tuned sense of melody and technical skill… Nary a song on Say Sue Me isn’t a total ear worm.”

Video "Good For Some Reason" https://youtu.be/9trv4T8SiJU